[Editor’s Note: Below is the full text of our 239th Weekly Transmission, originally delivered direct to the inbox of more than 600 GEM members on January 11th, 2023.]

Collectively, the GEM is a diverse community of proptech innovators spanning every role, sector, and geography.

While the biz intel, innovative thinking, and curation are valuable, most members are here to rub shoulders with peers making a mark on the world—we continue pushing the ball forward to facilitate curated connections. Again this year, there is still an immense amount of work before we fully realize the GEM’s potential as table stakes for successful founders.

Without further ado, maintaining the tradition started three years ago to report transparently on the makeup of the community, we bring you… the State of the GEM in 2023.

…from sectors far and wide

…representing locations across the globe

We’re still heavily residential, and that will remain the case in 2023. We broke out Rentals as its own sector, given our focus on it and its representation in the GEM. We didn’t successfully migrate everyone, so that category will likely see a huge uptick in members after another year of combing through our data.

The roles makeup remains largely the same as a year ago.

We picked up more members in most of our core cities, adding more than 20 in New York and another 15 in Greater Los Angeles. It’s interesting to note that the Bay Area actually declined from 70 to 67. A hypothesis: founders moved away during the pandemic and our data just now caught up to the migration. 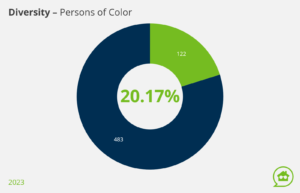 Events happened! Three years delayed, but we got there. And we’ll improve on that output in the year ahead.

Our VIP Dinner series continued in partnership with Resident with two dinners (April during Inman and October during CREtech). The Seattle founders dinner, which Plunk hosted at its corporate HQ, was a personal highlight given it was the first “proper” Seattle-area dinner in our hometown. Another noteworthy event: Our largest dinner of all time—42 attendees—took place during Blueprint in Vegas. I suspect we’ll top that with 60 or even 80 dinner attendees at Blueprint 2023. If you’re interested in joining us for the 2023 GEM Community Dinner during Blueprint, please join the GEM.

On the happy hour and Soiree side, I’m pleased with 2022 numbers.

Lackluster office hours output was sorely disappointing. We’ll get to 12 in 2023: Clelia Peters hosted January’s, and we have monthly hosts lined up through April already—Tigre Wenrich, Dave Garland and Heather Widman. If you’re a VC and interested, shoot us a note and we’ll get you on the calendar.

Virtual networking-wise, we have announced the beta of the new and improved Proptech Roulette. That will remain a central focus moving forward.

It’s going to be a tough year for growth across every industry. That’s a certainty in an uncertain world. Don’t despair: I’m hugely confident kernels of greatness will unearth themselves in the year ahead.

Through thick and thin, our pursuit remains to deliver every proptech founder all the connections, peer support, and business intelligence needed to propel their company to greatness.

Here’s to the crazy ones, the misfits, the rebels, the troublemakers, the round pegs in the square holes… the ones who see things differently — they’re not fond of rules… You can quote them, disagree with them, glorify or vilify them, but the only thing you can’t do is ignore them because they change things… they push the human race forward, and while some may see them as the crazy ones, we see genius, because the ones who are crazy enough to think that they can change the world, are the ones who do. — Steve Jobs, 1997

There are four parts to membership:

With a mission to attract the 1,500 most forward-thinking, and diverse, innovators, we’re looking for the best and brightest in all the land...

Wed Jan 25 , 2023
The UK is falling far behind EU countries in its performance and policies on home insulation and energy efficiency, and will lose further ground if “retained laws” from the European Union are scrapped, according to a new study. The report, by UK pressure group Another Europe is Possible and Germany’s […]